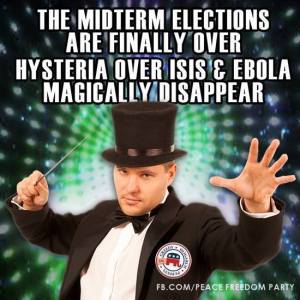 The simple answer is yes. I have said that the majority of American voters are stupid for years on our radio show. This past Tuesday reinforced that theory in a big way. I have to give it to the Republicans, they knew the best way for them to win was to bash President Obama for importing Ebola and surrendering to ISIS (sarcasm) in the month long 24 hour news cycle. Exit polls showed in the 60% range and above that people voted Republican because President Obama is seen as doing a poor job. Really? The Republican obstruction machine has been rolling for 6 years but the President is to blame? I have my issues with the Obama presidency, but I know America is a lot better off than if there was a President McCain or Romney.

Voter turnout was the lowest since 1942 because the majority of Democrats are horrible at messaging. Two thirds of the American electorate stayed home because they are disgusted with politics and politicians. Elizabeth Warren is the only Democrat that gets crowds out everywhere she goes. Why? She is actually talking about what 80% of Americans are pissed off about, she says things like student debt is too high, Wall Street is out of control, minimum wages are too low. There are far too many Corporate Democrats out there whose message is so similar to the Republicans that many people say “whatever” and then stay home.

Personally I think Democrats had better start standing up for Democratic values and give voters a reason to go to the polls. What do you think? Should Democrats focus on the populist message like Senator Warren or should they continue to be the lesser of two evils? What about Independent Senator Bernie Sanders for President in 2016?