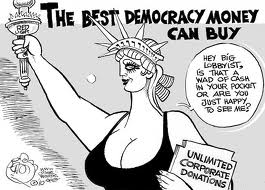 In order to be able to stand up to the “Corporatism” that has taken over our country, we must unite. No matter if you are Republican, Democrat or Independent nothing is going to change until we do. I have been encouraged by the Occupy Movement but as I have said before “we must dig deeper”. I don’t really watch TV anymore so I don’t get to see some of the political shows that are on, but I really like Dylan Ratigan’s (and follow him on Twitter and Huffington Post) views and I just joined United Republic. I am recommending that you check this site out, the bottom line is that there is too much money influencing our government. I want you all to sign up for their “Get Money Out” campaign. He calls out Mr. Obama in this video and the only way I will vote for anyone for POTUS is for him or her to publicly state this message.

My partners on Ronnagade Radio, Andy “The Rock n Roll Psychic” Brewer and John “Aquaman Ocean Defender” Koehler and I have been saying for years that we need to “follow the money”  and the best way to start a movement is to “change the way we do business” a cultural shift if you will. As long as we are worrying more about having the latest iPad or smartphone instead of what our dollars are being used to support, we will continue to see more and more of our lives being controlled by (as George Carlin would say) “our owners”. As Andy predicted back in 2007, the paradigm is starting to shift. Traditional organizing methods (letter writing, phone calls, etc.) aren’t enough, we need to take it farther.

I have been ranting on and on about the “Republican Terrorists” that have been holding America hostage since Mr. Obama was sworn in back in 2009. The GOP became the party of “NO”, going as far as Mitch McConnell saying his most important task this term was to make sure that Mr. Obama doesn’t get re-elected. So they have refused to do anything since taking over the House in 2010 without much opposition from Obama and the Democrats.  Let’s be honest Obama and the Dems folded so much they could have changed their name to the “Origami Party”.  I spent most of the past year screaming about the Dems (remember Obama is their leader) not standing up and continuing to cower at the feet of the “Tea Party Posse”. Their ineptitude probably fueled the Occupy movement almost as much as the greed of the 1%.

Face facts people, the only “bi-partisan” thing in America is the blind loyalty to the well-off and well-connected. It is not just a coincidence that we lose about $60 billion a year through corporate loopholes., or that the richest .05% have more combined wealth than bottom 160 million people. Thanks to the Supreme Court corporations are people as far as  the Constitution goes, although you will never see a “corporation” taking a perp walk for almost crashing the world economy, or die in a war for oil that was disguised as “spreading Democracy”. They were spreading something but it sure as hell wasn’t Democracy. Forget perp walks, we can’t even bring these crooks up on charges for their fraudulent practices.

There is going to be over $6 billion spent in the upcoming 2012 elections and we are supposed to be doing cartwheels because the GOP backed down and Congress passed a two month extension of the payroll tax cuts. Are you fricken kidding me? If that doesn’t tell you that Congress is a wholly owned subsidiary of corporate America then you are completely hopeless. The alarm clock is ringing America so wake up (you’ve been asleep too long) and join the fight to get the money out of our politics.

Remember if you are not in the richest 1% in this country, you need to join the “New American Revolution”.