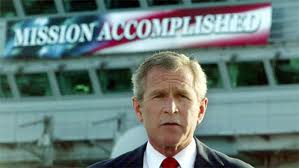 Today’s “Daily Socialist Propaganda” looks back at how the people of this country were manipulated by our elected officials, the media and greedy corporations. This wasn’t the first time and definitely won’t be the last, but I just hope you realize that things are only getting worse.

Bush, Cheney and company succeeded in exactly what they intended; they pulled the wool over America’s eyes and made a ton of money for their friends. The lies, oh the lies, we know now that there never were “Weapons of Mass Destruction”. The cost was supposed to be about $50-60 B total even with the vig, now we’re looking at a bill of upwards of $4 T and the juice gets bigger everyday. It would be bad enough if it stopped there, unfortunately we will never recover fully from the “true cost” of this war for oil. Our troops that were killed and maimed and can’t get the medical treatment they deserve and so desperately need. The people of Iraq who were going to love us and shower us with flowers for liberating them.

I can go on and on about all we lost but you all know, I just hope you stand up and stop buying the lies that are STILL being told to us. The names may have changed in some cases but the bottom line remains the same. How can we make money off the suffering of the majority of Americans.